You are here: Home / Archives for Food / Recipes

Don’t be scared. Say it with me: SpanaKOrizo.

“Spa”, as in: Hahaha! Remember when you used to go to the spa for a massage instead of cleaning diaper blowouts?

“Ko”, as in: The COpious amounts of times in a fifteen minute span you hear the word “Mommy”. (I counted today — 30 between the two of them, no joke.)

“Rizo”, as in: I’m hungRY ZO I’m going to eat my kids’ leftovers over the sink again.

Or whatever… just call it Greek Spinach Rice. (But it’ll really impress your friends if you pronounce it phonetically when you bring it to a potluck.) 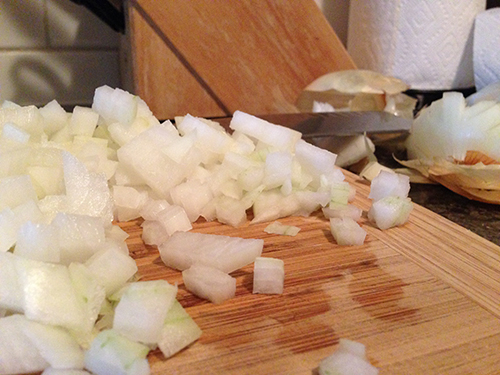 I have such great memories of Spanakorizo, it was one of my favorite foods to eat and was prepared a lot during Lent. It was several of a group of recipes my mom labeled “Greek Soul Food” — not that she ever cooked Spanakorizo. Cooking was mainly done by my Yiayia (Grandmother) and years later, as an adult, my Thea (Aunt) showed me how to make it with a twist — by adding a little can of tomato sauce, or V8 juice.

The original recipe calls for long grain rice, and I used to make it that way (or with short grain or with brown rice or any combination therein and adjust cooking time). Then, there were the bunches of spinach that would have to be soaked and drained a few times in the (clean) sink or a large pot to clear out all the dirt/sand. That was pre-baby days, though. Nowadays, the family has neither the time or patience to wait an hour or more for dinner. 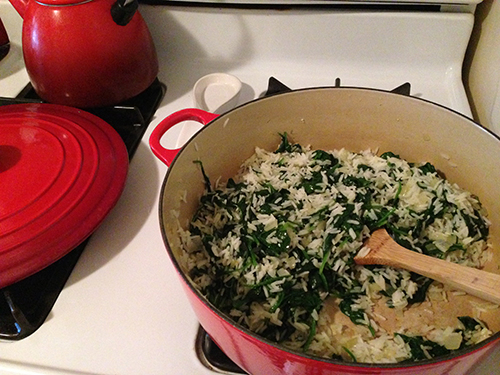 So, I’ve simplified it… given us a shortcut or two. And that is: frozen rice and pre-washed baby spinach. It’s a total lifesaver, albeit more expensive. I don’t really care which frozen rice you use, but we happen to use Whole Foods 365 Frozen Thai Jasmine Rice and it imparts a slightly sweet flavor along with the browned onions that’s really nice.

So nice in fact, that my husband and I ate an entire pot of it before we had to do kid pick-ups. They were none the wiser except for a bit of spinach stuck between my front teeth.

If you chop your onion and mince your garlic ahead of time, you’re looking at a meal that’s ready in about 20 minutes. 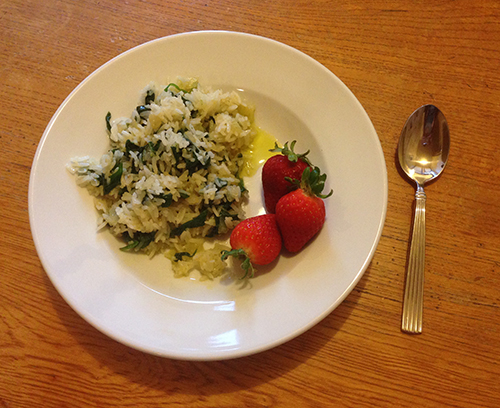 Prep your onion and garlic. Coat the bottom of a large sized pot/dutch oven with olive oil and heat on high. When the oil is ready, add your onion and sauteé until translucent. Lower heat to medium and add garlic and spinach; stir to combine and reduce the spinach. While the spinach is reducing, cook your frozen rice according to package directions. (I will sometimes cook by about a minute less since I know I’m adding to the pot and it’ll continue cooking with the spinach.)

Once the spinach has reduced and is tender, add in your rice and stir together. Keep on the heat for another minute, add your salt to taste, serve and enjoy!

(If you want to add the tomato sauce, I think the right time would be when you add the spinach as it’s reducing. You’ll also want to add a pinch or two of sugar, or a comparable sweetener, since it balances the acidity/tartness of the tomato sauce.) 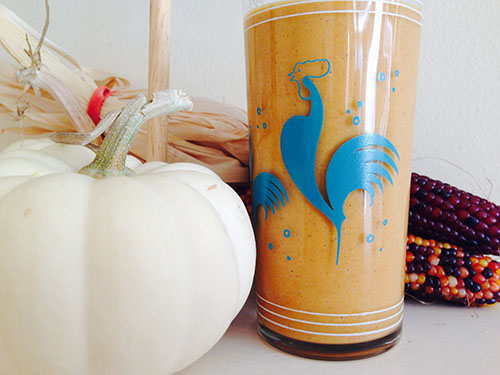 I really wanted to do right by this recipe. Anyone who has known me long enough knows that I love pumpkin pie flavored (pretty much) anything. Especially pumpkin pie ice cream, which I can no longer eat because at some point in my adult life when I ate dairy it started to feel like someone was stabbing me in the stomach. (Et tu stomachus?) There was a smoothie place I frequented in my early 30’s and every year around this time they’d bust out a pumpkin pie flavored smoothie. You better believe I bought the big ol’ barrel-hug-your-arms-around-it size and drank that till I peed orange.

My mission with this pumpkin pie smoothie was to get it to taste like a milkshake. This took a little work over the past week, but I think I achieved success this morning. I figured I’d nailed it when I realized I was halfway done with the smoothie in less than 30 seconds. I decided to put the smoothie in the refrigerator so I wouldn’t drink it so fast, but then I just kept doing a walk of shame back and forth to the refrigerator, opening and closing the door over and over again for three minutes until there was nary a drop of pumpkin pie smoothie to be had.

This is a sweet smoothie, but it’s Halloween and dammit, we deserve a sweet treat — especially if it’s going to be healthy. Now, if you’re shuddering at the ingredients listed because you’re calculating it’s going to be about a thousand calories — and you’d be right — keep in mind these are nutrient dense ingredients with high quality fats. My body was so satisfied after this smoothie that I didn’t have a pang of hunger for six hours. Still not sold? Share it with someone then, not that I think you’ll be able to once you try it. I had Kidbe in the baby carrier while making this and I shared some with her. Both of us were sporting some serious orange moustaches.

The only minor complaint about this for me is that it wasn’t cold/frosty enough. If you know how to get the texture to be more like an icy milkshake, please post in the comments below!

Put all ingredients except the ice into your high speed blender. Once blended, add in the ice and blend again until the ice is completely broken down. 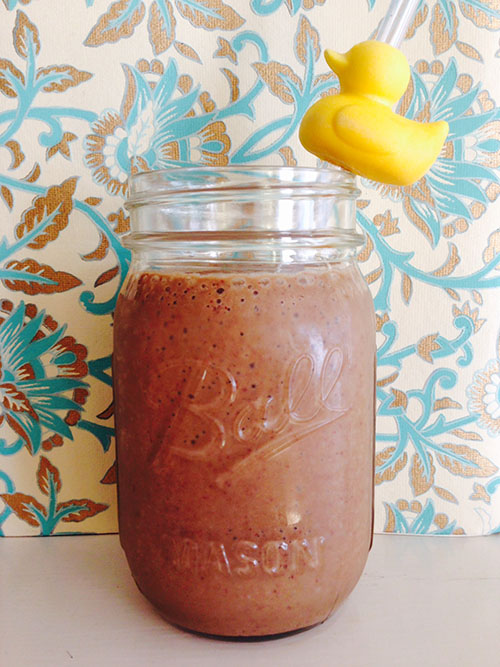 This Black Forest Smoothie Recipe was born out of a lot of leftovers. I had made some coconut curry the day before and had some leftover coconut milk, I had an open bag of frozen cherries in the refrigerator, and the last of a big tub of spinach. This smoothie came out even better than I’d hoped. It’s a great blend of creamy, sweet and tart.

I wish I could report that no smoothies were harmed in the making of this blog post, but unfortunately, the smoothie pictured above met its demise shortly after I took this photo. Kidday asked for a sip of my smoothie lunch and no sooner did I say “Please be careful, it’s in a glass cup” than I heard a huge thud on the floor and saw a chocolate flavored Jackson Pollack gracing the canvas of our floor, stove and dishwasher.